How to Create a Wikipedia Page For Your Company

You are here:
Research 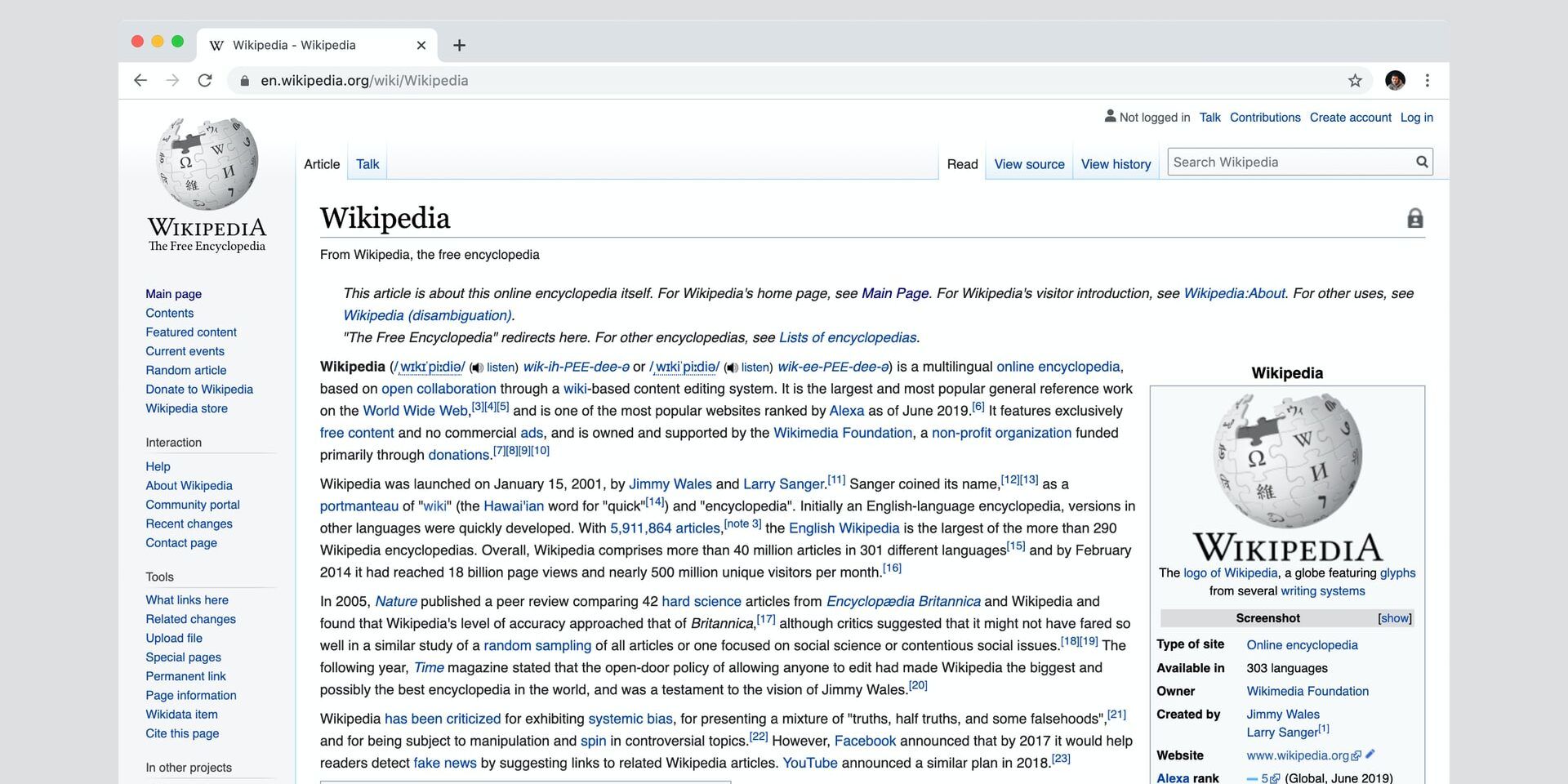 If your goal is to build trust, brand recognition, and an authoritative online presence for your company, nothing beats Wikipedia. Landing a Wikipedia page is a sign of a respected, well established and trusted business—but if you don’t have one, how do you go about creating one? Read on to learn more about Wikipedia, its editing process, and how you can secure your own page.

What Is Wikipedia, and Why Should My Company Use It?

Wherever your company finds itself, it will always have to compete against other companies in getting the attention of consumers. Unless your company is innovating in some untapped market, your business will always be at risk of going unnoticed by the public in our advertisement-saturated world, no matter the quality of your offerings.

Thus, having more channels to get the word out about your company is always a worthwhile thing. In our current age, anyone can find out more about any person, topic, or company they’ve heard about with the click of a button. This is both a great opportunity, and an immense risk for your company.

Anyone with an internet connection can find out more about you with just your company’s name alone. If they like what they see, they might become interested enough to try out your products or services for themselves, graduating into a full-fledged customer in the process. However, it’s just as likely that they’ll see misinformation and criticism of your company’s offerings. Valid or not, this prospective customer has now gotten a negative first impression of you, and will be far less likely to consider your services.

Companies have traditionally tried to circumvent this by creating their own company websites, setting up an official online hub for everyone who wants to learn more about them, rather than let their online image be dictated by someone else. In one way, this works. If you search the names of every big company today, you’ll find their official site appearing at the top of the search results, rather than anything made by a third-party. This works especially well when connected with a constellation of social media accounts, as it provides a channel to update loyal consumers to your latest developments, rather than just be a hub of static information.

For all the advantages of having an official website out there, though, there is one big disadvantage. Official websites (and other official channels such as social media accounts) are often seen as biased. This is just the natural consequence of them being entirely owned and operated by its parent company, beholden to nobody else. Official websites and social media accounts can show only the positive reviews and downplay (if not completely ignore) the negative reviews, for instance. They are designed to promote the company, after all, not provide fair and accurate assessments. They are interactive advertisements in digital space.

On some level, consumers realize this. In a survey of customer behavior, more than 90% of consumers said they were more inclined to trust recommendations from friends and family than any message pushed by advertising. Similarly, 88% read reviews from fellow consumers to determine the quality of local businesses, despite the plethora of official sources of information online. Word-of-mouth, to 74% of consumers, was cited as a key influencer in their purchasing decisions.

If fellow consumers are considered more reliable than official channels, then how in the world are you going to get your name out there in a comprehensive manner? Enter Wikipedia.

Wikipedia is an online encyclopedia, which covers topics on every area of human knowledge: History, Geography, Arts, Literature, Pop Culture, all the different branches of Science, et cetera. It is essentially no different from a volume of Encyclopaedia Britannica, except much more expansive. As of this writing, the English-language Wikipedia alone contains over 6 million separate articles.

Wikipedia’s expansiveness is in large part due to mass collaboration. By design, anybody can edit an existing article, or start writing a new one from scratch. This doesn’t necessarily mean those changes will be permanent or accepted (read Part 2 for more information regarding standards), but nobody is totally barred from contributing. Combine this with the fact that Wikipedia attracts millions of readers around the world (making it one of the most visited websites on the internet), and you have an incredible opportunity for promotion.

Wikipedia is frequently scoured by volunteer editors, looking to fix errors in both grammar and factuality. Thus, a company Wikipedia page will be perceived as (relatively) more unbiased compared to a fully company-owned website. Not only that, but even having a page in the first place shows to viewers, before they even read the page, that you are a company with at least some measure of reputation and importance. If your company didn’t already have those things, it wouldn’t be allowed to even have a page in the first place (read Part 2 for more information regarding notability).

Let me now explain how to set up a Wikipedia page of your own, along with the rules governing page creation and editing on Wikipedia.

How to Create Your Own Page on Wikipedia

While just about anybody can start their own article, it is up to Wikipedia’s vast army of editors to decide whether the topic actually deserves its own article or list.

Notability is the name given to a set of standards applied to a potential topic of a Wikipedia article, as a check to see if it merits being its own page. If your topic (in this case, your company) does not pass this test, then your article is liable to be taken off Wikipedia.

According to the Wikipedia page on notability, “A topic is presumed to be suitable for a stand-alone article or list when it has received significant coverage in reliable sources that are independent of the subject“. Note the highlighted portions of the quote, for they highlight the fundamental points that make or break a topic’s notability. Let me list down and explain each point:

“Significant coverage” means that there are third-party sources that address and engage with the topic on a level more than a brief mention, such that no first-hand research is required to extract the information necessary to write the article.

“Sources” mean secondary sources. Sources from multiple different authors and organisations are generally expected for a notable topic, regardless of their depth or quality. Multiple publications from the same author or organisation are collectively considered a single source for the purpose of establishing notability.

“Independent of the subject” means that works created or commissioned by the subject or their affiliates (e.g. autobiographies, advertising) are automatically disregarded when establishing notability.

“Reliable” means exactly what it says, that the sources used must be considered a reliably accurate source of information. Published and widely-accessible works (in all forms, media, and languages) are generally considered reliable sources unless proven otherwise. Sources that are not published (e.g. word-of-mouth) or not accessible (e.g. a document locked in a vault with no copies available) are disqualified as reliable. The amount of secondhand sources available are also good measures for the topic’s notability.

“Presumed” means that even if the topic might technically meet all the other criteria for notability, there is still a possibility that it will not be allowed its own article after further analysis by the editors. While this might seem unfair, the most likely reason for such a refusal would be if it violates “What Wikipedia is not”.

“What Wikipedia is not” is a set of examples used to show what Wikipedia should avoid at all costs. One of the most notable for us, is the prohibition against self-promotion (to quote: “Information about companies and products must be written in an objective and unbiased style”, “Wikipedia articles about a person, company or organization are not an extension of their website, press releases, or other social media marketing efforts.”).

You shouldn’t approach this like any other copywriting project, because any obvious bias that the page might have (e.g. including only praise for the company, while not including any criticism) gets it liable to be removed under the clause of no self-promotion. Rather, do not be afraid to place both positive and negative reception into your page (citing generous sources for both), as that is generally what people expect when visiting a Wikipedia page. Remember, you are doing this to increase awareness of your company in general. If you want to try improving your PR as well, other channels (e.g. social media) would be more appropriate.

Part 3: How to Write, Wikipedia Style

Now that you’ve gathered your sources, and made sure they complied with Wikipedia’s standards of notability and fairness, it is time to actually put words on the page and write that article.

Before doing that, though, you need to check Wikipedia’s Manual of Style first. Wikipedia has a certain house style in order to help its many volunteers write and edit articles with consistent and precise wording, layouts, and formatting. Following this style will help your content get approved faster.

Another method to ensure the maximum possible success is to use a Wikipedia account with a reputation of positive contributions to the site. If this account has admin status, even better. Thus, instead of creating a new account just for the purpose of creating the company’s page, see if you can find a trusted person in your company with a pre-existing Wikipedia account (as well as the willingness to use it for the company’s own benefit) instead. The larger your company, the more likely that this is. Only resort to creating a brand-new Wikipedia account from scratch if you cannot find such a person.

Reputation is important, and even more so around a community driven by passion more than profit, such as Wikipedia. Instead of the arduous and time-consuming task of building your own reputation from scratch, why not bank on reputation that your people might already have.

Note: When a person directly affiliated with an organization in which they have a personal stake (such as an employee of a company) starts or edits the associated Wikipedia page of their organization, Wikipedia considers it a Conflict of Interest, and will scrutinize any suspected edits and new content much more closely (see their FAQ on Organizations for more information).

So far, I’ve been teaching you how to start your company’s page directly. But as you can see, you will inevitably run into issues regarding conflict of interest. While one can choose to hide one’s connections, doing so is unethical, unprofessional, and potentially embarrassing to yourself and your company if found out. Nobody is 100% anonymous online, after all.

Luckily, there are a plethora of firms and businesses who specialize in writing Wikipedia articles in other people’s stead. Firms sell themselves on being able to produce well-written articles that follow Wikipedia’s guidelines, and are able to be approved quickly. As can be seen with these lists, there are plenty of such businesses, which speaks to the ubiquity and importance of Wikipedia as a source of information. Each of them specialize in slightly different things, so browse among them to see which of them fits the needs of your company the most.

If you need help building your own Wikipedia page, please reach out to our team.

An Overview of Major Components of Search Engine Optimization
October 26, 2021

How To Get a Google Knowledge Panel
October 4, 2021

How To Get News Coverage for Your Business
October 4, 2021

How to Create a Wikipedia Page for Yourself
August 2, 2021